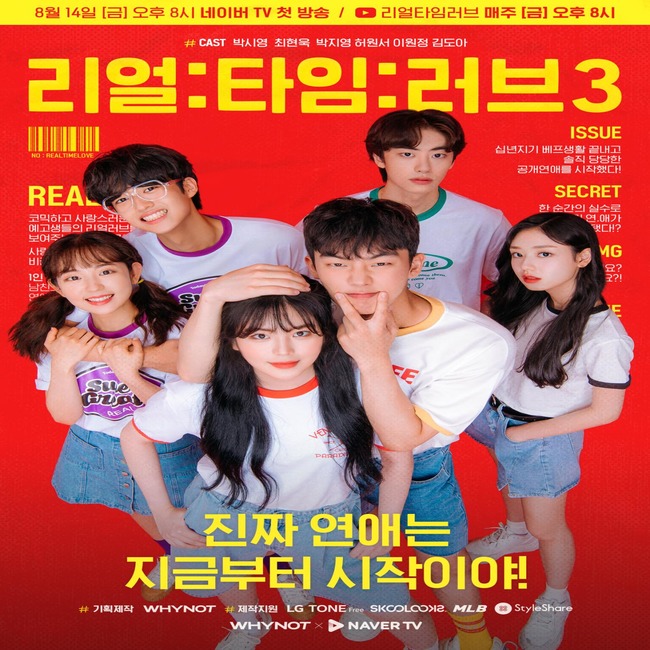 It is the third season of the famous Korean series Real: Time: Love. The drama follows the story of Hong Yun and Moon Ye Chan. They both have known each other for ten years and are best friends. Since they knew each other so well and were so close, they ended up dating. They date as an honest and confident couple, openly in public for almost six months. But then something happens, and it becomes requisite for them to hide their relationship. As a result, they make a fake declaration stating that they have broken up, while they instead start dating in secret, endorsing a secret relationship. All in all, it is a drama revolving around the love story of two young teenage students.

The drama has an overly invigorating setting. The show’s format is such that you might occasionally forget that you are watching a web drama. Instead, you might believe that you are watching any regular daily vlogs made by any young teenage girl. The drama has a defined YouTube video style ambience to itself. Not to forget how the series is brief and the episodes are witty enough to make you binge-watch it all. The storyline and the characters are very charming and will leave a mark on your heart.

The starting is quite pleasing as the male lead shows genuine feelings towards the female lead. This continues throughout the series until the end comes along and ruins it all. The ending feels extremely betraying. The cliffhanger type ending with Yun Yi kissing Ye Chan, and him not showing any kind of remonstration but instead hinting that maybe he has changed his mind after that kiss, is something that might appeal to a lot of audiences. It undoes everything that the story builds up till that point. Ye Chan’s act is almost a betrayal towards Hong Yun.

It is a precise and brief drama. It is your perfect rom-com series which you can watch for lots of entertainment. Since the characters are young, they are overloaded with cuteness that will melt your heart. The chemistry between the main leads is exceptionally adorable. The drama has a very easy going locus, and it is easy to grab an idea of what is happening. Another thing worth mentioning would be the second main lead syndrome, which hits exceptionally strong in this series. Yook Deok Jin will inevitably steal your heart while you are completely oblivious about it. The way he looks at Hong Yun will make you not at all care about her and Ye Chan’s relationship. On the contrary, you might probably wish they break up so that Deok Jin and Hong Yun has a chance.

The star cast will have you smitten through their acting. ‘Park Si Young’ plays the role of the pleasant Hong Yun, and ‘Choi Hyun Wook’ plays the role of Moon Ye Chan. The proclivity between both of them is lovely. But to be honest, ‘Lee Won Jung’ as Yook Deok Jin has to be the main star. The boy stole the show for sure. He will easily make you all swoon over him.

If you are in search of an entertaining show with good comedy and romance, then this is the perfect pick. The entire series is worth the binge. Although the ending is somewhat cruel, its cliffhanger nature will make you hop on to the next season immediately and just increase the fun.

Tale Of The Nine Tai

You Raise Me Up

The Scale Of Desire