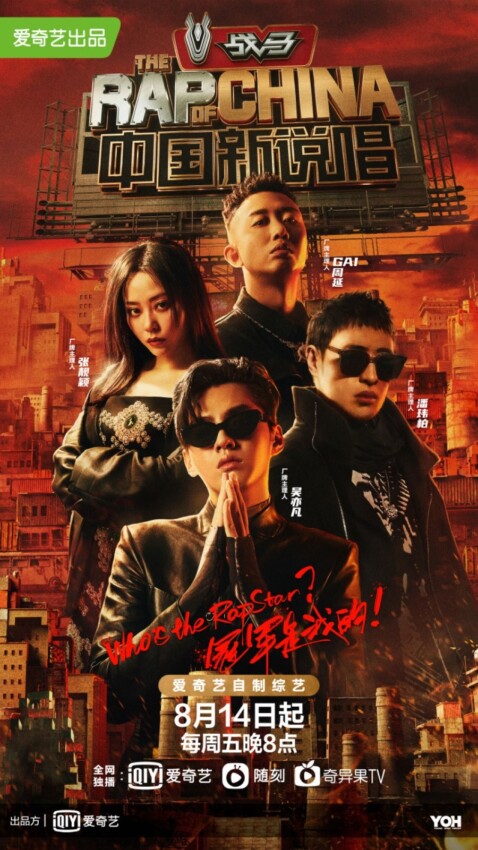 The Rap of China: Season 4 is a Chinese competitive reality show that aired in 2020. The show follows the format of having three hip-hop groups who are trained and given attention by the judges of the show, and after a fierce competition between these groups, a winner is selected.

The Rap of China series has a strong fan base because of its original content. The reality show has contributed to the spread of the genre of Hip-Hop in China. The viewers of the show can actually witness the contestants of the show rising to stardom, owing to their extraordinary talent.

The major disappointing factor about The Rap of China: Season 4 is the uneven screen-timing of the contestants. Some fans who have already watched the show, also have opined of being biased, and have noticed that some of the contestants are seemingly more talented in the field than the mentors/judges themselves.

The Rap of China: Season 4 is a competitive reality show and is heavily inspired by the South Korean competitive show, Show Me the Money. The producers of Show Me the Money even accused the producers of The Rap of China of plagiarism, as the format, logos, and concept of the show are strikingly similar to the South Korean show. Though, The Rap of China has had to go through a long list of controversies, including plagiarism, the popularity of the show was never hindered and went up and forward. The groups of rappers are attended by the respective producers, who give their input on their performances. The Rap of China has contributed to the rise of popularity of the Hip-hop rap genre in China significantly. The show perfectly mixes the genre of competition and entertainment, which keeps viewers hooked on till the end of the episodes. After a fierce battle of competition between these talented contestants, the winner is selected.

There are four-star producers of the show Kris Wu who leads the Kris Wu label, Will Pan leads the Will Pan Label, Jane Zhang leads the Jane Zhang label, and GAI leads the GAI Label. After Journey, KeyNg, and Jennifer Zhou, are some of the rappers who have contested in the reality show. The celebrity guest who appeared in season 4 is Jay Park, Lu Han, G.E.M, Li Rong Hao, and WD.

If you are a person who likes watching competitive reality shows, then this is definitely your cup of tea. Right from the audition to the battles, you can watch the progress of the rappers, and some of them have also made a huge name for themselves in the field. Overall, if you like rap or even competitive reality shows, then I suggest you watch this reality program.

Do You Know Hip Hop?

Back To The Idol 2