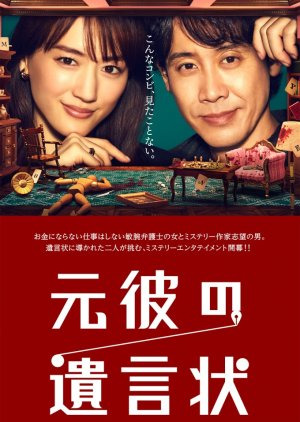 Motokare No Yuigonjou is a Japanese Drama that aired on Fuji TV from April 2022 to June 2022. Motokare No Yuigonjou has an alternate title of ‘My Ex-Boyfriend’s Last Will.’ The storyline revolves around Kenmochi Reiko, who is a strong-willed fearless lawyer. One day, she learns that her ex-boyfriend has been murdered and has left a strange will. The drama depicts the unfolding of the mystery that starts with her ex-boyfriend’s murder.

The drama stays true to its genre of thriller and mystery. The acting is good, and the chemistry between Kenmochi Reiko and Shinoda Keitaro is the cherry on top!

Though the plot is exciting and the drama could offer a gripping storyline to its viewers. However, some of the viewers might still get bored with some of the cases, while some of the characters might be hard to love at first glance.

Kenmochi Reiko is a talented and fearless lawyer in corporate law, working in one of the top law firms in Japan. She is capable and willing to do anything to win her cases. One day, she spends leisurely sending emails to all her acquaintances, inviting them to drink with her. She gets a reply from her ex-boyfriend, which read that he is dead and has been murdered. The most unusual thing about this murder is the will left behind by his ex-boyfriend which read that his murderer will get his fortune. She is then approached by Shinoda Keitaro to join hands with him to get the vast wealth of her ex-boyfriend. The main characters of this drama are not entirely black and white and instead have many shades of grey, which is a relatively a risky factor in making the characters likable by the audience. However, this is not the case in this drama; as the drama progresses, the characters are shown each of their traits which makes them act the way they do. The characters are well-written, and the character development is very significant as the story progresses. The drama is well directed with a well-written plot.

The drama is well-made and well-directed drama. Though the genre is mystery, there is a lack of a mystery in the plot, though it was evident that the makers did try hard to justify its mystery genre. However, the character development, especially in the last episodes, is the most attractive point of this drama. Overall, Motokare No Yuigonjou is a good drama that can be watched if you want to watch something suspenseful and dramatic.