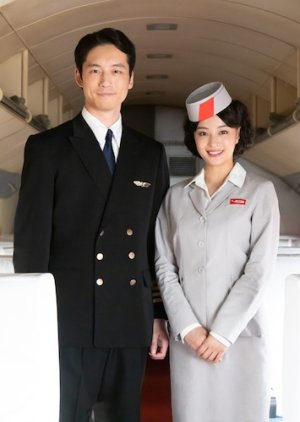 Set in World War II, this is the story of Komari Sano, who overcomes huge adversities to fulfill her dreams.

Komari’s parents owned a small company that made aircraft parts during world war II. Her brother is a pilot. Sano had always wanted to be a pilot but had never quite got a chance.

Tragedy strikes when her brother dies in a kamikaze attack. Her parents also die in the Tokyo bombings. Left orphaned and without a living, Komari goes to live with her aunt, who runs a ryotei, or a traditional Japanese restaurant.

Aviation gets delegalized in Japan after the war. After lengthy negotiations with the main authorities in the Allied Powers, the security chief of the Civil Aviation Bureau in Japan, Sizuo Matsuki finally gets sanctioned to launch the Civil Aviation industry in Japan.

Seeing the opportunity, Komari leaps into the cut-throat industry with her friends and acquaintances to become Japan’s first Air Girls.

Japanese romantic films always have that flavour of nostalgia and rosiness. Many moments give you that special warmth in your heart, be it Komari’s determination to apply herself in her new career, the relationship between her and her parents, or her interactions with her friends, especially Yuki. All in all, this film makes you grin to the depths of your heart.

The story is beautifully well-put-together. The romance and chemistry between the main leads are alive and poignant. It is impossible to not get butterflies every time they come together on screen. We can see and experience the world through the eyes of a young Japanese woman in the turbulent aftermath of World War II.

Komari is an extremely well-written character. It is hard not to admire her resilience and strength. The other characters are fleshed out so well that it is hard to imagine the film without them.

There are several areas where this film could have done better. There were several chances to explore the themes of patriotism and feminism, but the attempts are a bit meagre. Given the era, it is a bit expected to not see the bold feminism we are accustomed to in this modern world, but still, it is always fun to see our on-screen girls break the rules.

Kentaro Sakaguchi’s character deserved some more screen time. Yuki was interesting and his backstory could have been developed. Also, it was a bit disheartening to see how the romance unfolded in the end. It would have been better for the film to be a bit longer.

Suzu Hirose and Kentaro Sakaguchi show their love of their craft through their seemingly effortless portrayal of Komari and Yuki. The story is beautiful, but it could only have been brought to life through them. The other characters, played by the talented Naohito Fujiki, Hirona Yamazaki, Ryoko Fujino, Kurumi Nakada, and others, do not lag. All of the actors play their part with grace and diligence. They all carry the film on their shoulders.

This film is a great piece of period drama. The forties were tempestuous years for every country and also the time for a lot of progress, especially for Japan. It is always fascinating to see the way of life many of our parents and grandparents led. Although lacking in some areas, it is a brilliant movie, showcasing the struggles and resilience of Japanese people and the life they built for themselves.