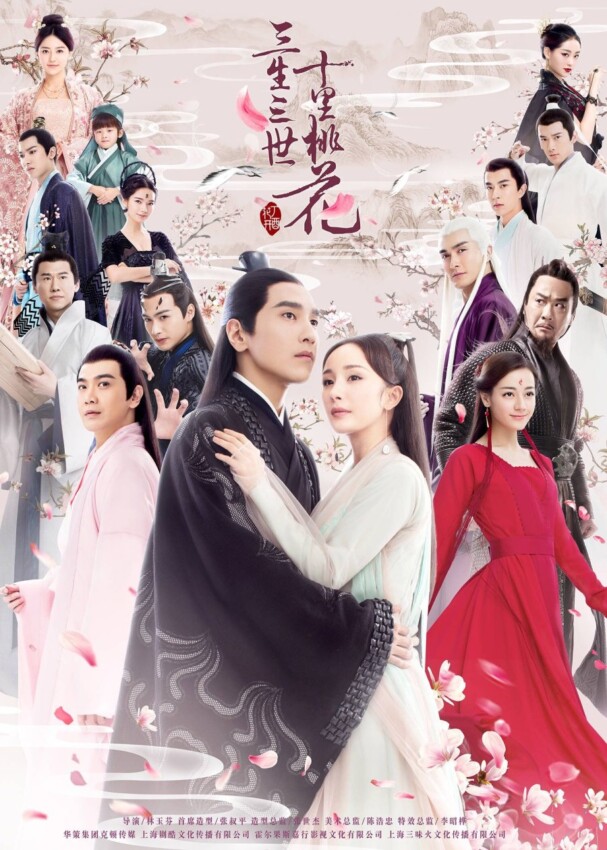 Bai Qian is a nine-tailed fox and the youngest daughter of the Fox King. She is mischievous and bright, so her parents decide to send her to Kunlun mountain to become the disciple of the God of War, Mo Yuan. The only problem was that he only takes in male students, so his brother Zhe Yan makes her look like a boy and gives her the name Si Yin.

Mo Yuan isn’t fooled of course but allows her to stay since she successfully wields a particularly powerful but elusive divine instrument when it appears. So Bai Qian ends up in Kunlun mountain and becomes his favorite student.

While she was there, due to the different clashes in different clans and other intrigues, a war breaks out in which Mo Yuan took part. To seal a demon lord, Mo Yuan ends up sacrificing his life.

Some seventy thousand years later, Bai Qian is banished to the mortal realm, when she tries to sacrifice herself to seal the same demon lord again. She loses all of her memory and her divinity.

She begins life alone on a secluded mountain. One day, due to some mishap, a man’s life is endangered, but Bai Qian manages to save him. He is actually the Crown Prince of the Nine Heavens, Ye Hua. He looks a lot like Mo Yuan.

Unknown to both of them, they were betrothed in Heaven. They still do not know their true identities, but despite that, they fall for each other.

Little do they know that their love has a lot of trials and tribulations to overcome and that they are destined to meet again and again in three lives and three worlds.

The love story blossoming between the two main leads forms the core of the story. Their opposing individual natures and ways clash and meet together in a playful and sometimes sorrowful dance, which leaves the viewer thrilled.

Much of the light-hearted moments are due to the spunky nature of the heroine. She shines bright and therefore every scene she is in makes the viewer smile.

The villains aren’t interesting. Their motivations are pretty stupid, and they do not intimidate. There are lots of characters, but none of them are special. The CGI is terrible.

Love stories between Gods seldom have smooth sailing. The enormous amount of powers they carry, their beauty, and their characters make them very desirable to many other such divine beings, which leads to jealousies, ill-will, and eventually conflict. The series beautifully captures the very essence of one such love story.

I feel like this series had potential, but it just made me cringe. The plot is good. The heroine is spunky, but she is irrational. There is a general arrogance with which she deals with the others, especially the female characters, which is confusing.

Her dynamic with Ye Hua is problematic. He practically forces himself on her, which makes me wonder where her arrogance goes when he is crossing her boundaries.

It is 2022, not 1822. The creators should have been aware of the kind of messages they are sending to young girls, who begin to think such misbehaviors are romantic.

Also, I have never understood the obsession of using women as petty villains, who only get jealous over beauty or a love interest. Speaking from experience, women in real life are complex and have complicated twisted intentions and actions.

They could be jealous of the heroine and have other agendas as well. Dramas like these reduce women to mere shadows, whose only real purpose in life is to follow a man.

However, the cinematography is perfect. The episodes progress smoothly with apt music amplifying the different moods and themes. The celestial atmosphere has been carefully crafted, as one would expect with divine beings. The songs are beautiful. The characters have been well-acted.

Yang Mi is dynamic and expressive as the different characters she portrays. She pulls off every character with flair and dedication. Mark Chao is silent and eloquent. His expressions convey a lot without having to use dialogues. Gao Wei Guang and Dilbara Dimurat are exceptional as Don Hua and Feng Jiu. The supporting cast is great and each plays their character very well.

I feel this series is a bit stereotypical, but it is riveting. Even if a seasoned cinephile cringes while watching some of the episodes, they will surely be pulled in and continue watching till the end.