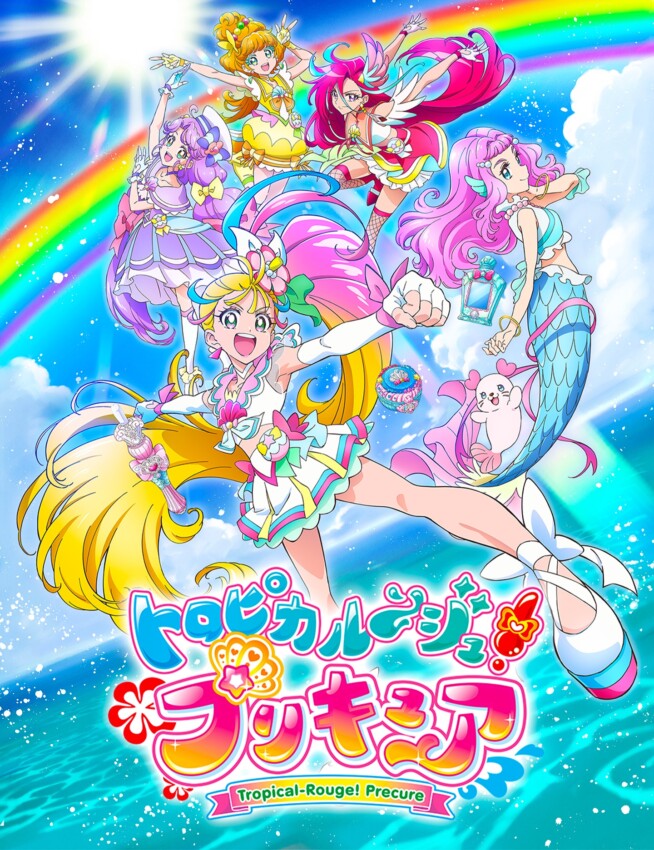 Manatsu Natsumi is in the first year of middle school. She is all set for a new adventure. She is moving to an island home to live with her mother. Her mother is a marine biologist, and it thrills her. She is the most excited about the school clubs. But, her plans take a different turn when she meets Laura, a mermaid. Meeting Laura results in Manatsu becoming a Pretty Cure, Cure Summer! She gets sent to the Grand Ocean. Her mission is to go to the mermaid kingdom and find the other Pretty Cures. She has to find them to stop a witch-the witch plans on stealing the motivation energy of people. As the story proceeds, we see her joining Cures Coral, Papaya, and Flamingo. Together, can they defeat the witch? Can Manatsu keep living the life she is excited about?

The show follows our girls transforming with the power of magic and makeup. They transform into pretty cure and beat up the villains. They are wholesome and feel-good to watch.

Some viewers may think the makeup used as a means to sexualise them. But it can also be thought of as the character’s coping mechanism to fight evil.

We embark on the journey to the mainland with Manatsu. She is a lively girl who loves her friends and hanging out with them. Soon, she encounters Laura. Laura was assigned to find other Pretty Cures in Aozora city. We first meet her when she gets attacked by the witch’s minions. We see her transforming Manatsu into Cure Summer. We are shown that the other Pretty Cures also go to the same school as Manatsu. Sango is in the same class as Manatsu. But Minori and Asuka are second and third years. They unite to start the Tropical Club – their own club at the school. They start organizing themselves and enjoy activities together. But all of them have problems of their own. The show deals with them dealing with their emotional pieces of baggage, while fighting the witch.  We see how Sango does not have self-esteem and is afraid to stand out. She was bullied when she was younger. She was criticised for making the wrong choice. This incident made her lose confidence in herself and her ability to trust her own decisions. We see her feeling inferior and battling with being good enough. We see her transform into Cure Coral. We also see her rebelling against the opinions of others and slowly gaining more confidence. We also see Minori’s transformation from her expressionless self to her energetic self. She is free when she is Cure Papaya. We also see Asuka’s transformation when she turns to Cure Flamingo. Though she still maintains her laid back image, we know her strained relationships with other people. We see her trying to avoid the student council President’s grudge against her. We also see the head of the disciplinary committee holding a grudge against Asuka for various reasons and hindering the formation of their club. We also see Laura trying her best to fit in with the rest of the human girls. She has trouble using her legs to walk. It adds a humorous touch to the story. We also see her desire to spend more time with her friends while hiding her real identity. She has a lot to learn about humans. We end up rooting for our favourite mermaid to do her best and survive in the harsh human world. We see them uniting to fight against the witch of Procrastination. Their fights are well-coordinated and offer the viewer a sense of accomplishment.

The action is well animated. We see the character’s journey to accept herself while battling supernatural threats. The story is both meaningful and fun. The show does not force its values onto its viewers; therefore, it is more wholesome and enough to introspect about. The character building is also well done.

The series feels good to watch and is almost inspiring to watch. The girls’ personalities are wholesome and diverse, making it an exciting watch.