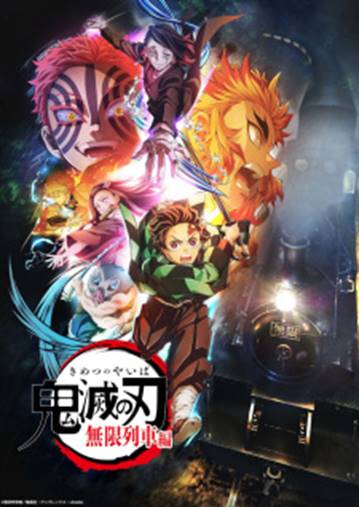 Demon slayer corps has sent one of their best Flame HashiraRengoku, to hunt down a demon named, Enmu, who has killed many people on the Mugen train. Tanjiro, a kindhearted boy whose family got killed by the monster, and his sister have turned into a demon herself, so Tanjiro wants to become a demon slayer to save his sister and defeat the demon once in for all. So Tanjiro, Zenitsu, and Inosuke board the train to fight against this demon. But this demon has the powers to put the passengers into deep unconscious dreams. Everyone on the train has their problems and dilemmas in their lives, which they get the chance to face in their deep sleep.

The stunning arts, animation, and backgrounds give amazing visuals and set the perfect spooky mood for the show. The openings and the OST were excellent. They have great fight scenes that are always a must in animes. The manga-turned show gives perfect storylines and plots with well-built characters. Tanjiro’s character as a self-righteous man is the most likable character among them. Rengoku and Akasa’s fight scenes were one of the memorable parts of this show. The villain had unique powers that made things interesting, as we got to see the subconscious minds of these characters.

Sometimes the episodes get a bit slow and dull with long recaps. They have some unflattering dialogues that get irritating at times. The humor felt a bit dry as well. Some characters lacked deep characteristics but got somewhat acceptable for the sake of the plot. As a remake of a hit movie in comparison, this show might lack in a few ways but still can be enjoyable people might appreciate the additional content.

This show is a second season of the demon slayer series and a remake of the same name. Rengoku is a demon slayer ready to fight against a new demon called Enmu, who’s killing the passengers of the Mugen train. Tanjiro, Zenitsu, and Inosuke board the same train to discover more about this demon haunting the passengers. Tanjiro also has his dark past about his family getting slaughtered by this evil demon and his younger sister turning into one herself. Tanjiro wants to cure his sister, but this demon has unique powers which can put people in deep hypnotic subconscious sleep by manipulating their dreams. These heroes are supposed to fight from their fears to win against this evil demon and destroy him. To save the passengers and defeat the evil monster, they all need to work together and help each other.

Haruo Sotozaki is the director of this show. Natsuki Hanae, Hiro Shimono, and Yoshitsugu Matsuoka voice-acted Tanjiro, Zenitsu, and Tnosuke in this show. Satoshi Hino has voiced over Rengoku’s charcter.

The show would be a good investment of time for people looking for a quick watch. People who enjoy great visuals and animations would be pleased with the production. This show had a beautiful storyline and character development. The good factors outrank the bad.