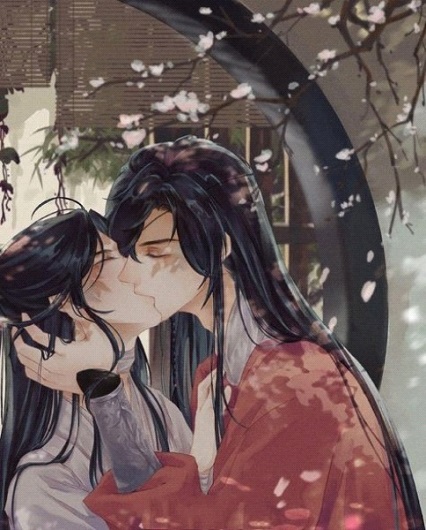 A long time ago, Xie Lian, the crown prince of the Xianle kingdom, died at the age of 17. But due to undisclosed circumstances, he was not allowed to ascend into heaven and was sent back to the mortal world. After years, he again ascended to heaven but was denied again and sent back just minutes later. Eight hundred years later, he is the laughing stock among all the realms. To compensate and earn merit points, he decides to eliminate all evil from the mortal realm. Accompanied by two immortal officers from the heavens, he starts his journey. On his very first task, he encounters Hua Cheng, a mysterious ghost who rules the ghost world. The officials are terrified of this ghost. Hua Cheng has been observing Xie Lian for several years. Now, they must uncover the secrets of heaven that have been kept undercover for years.

Heaven Official’s Blessing showcases beautiful animation that makes the viewers want to dive into the world of fantasy and live with the characters. The sweet and subtle gestures convey yaoi and the character’s affection. The world-building is impressive and exciting, describing the functioning of the realms and the politics involved with it.

A few scenes seem a little still, except a few moments here and there, but they make the characters seem even more alive. The slow-burning romance may not be for everyone.

The gods have been shown as people who have limits. They are not omnipotent, and it makes the show more realistic. The politics, as well as the plot twists, keep the viewers hooked. The strength Xie Lan shows while fighting to protect mortal beings gives hope to the viewers. Even if Xie Lan is suffering, he helps others and protects them. Xie Lan is made fun of by all three realms. The gods laugh at him and mock him, marking him as someone who brings misfortune wherever he goes. After losing his life, Xie Lan had lost his loyal servants as well. Yet, he stands proud and does what he feels is right. Hua Cheng believes in Xie Lan and hence, supports him in unveiling the secrets of the heavenly realms. Xie Lan and Hua Cheng were meant to be. It was written in their stars. Even though Xie Lan doesn’t understand anything, he feels he has an older connection with Hua Cheng. It is a delight to watch them get together at the end. Xie Lan is a prince who is striving to ascend heaven, and Hua Cheng is the king of ghosts, yet out of everyone, they trust each other the most. Despite being opposites, they have faith in each other and value each other over everything else. We also see how dirty the heaven officials played to avoid their secrets from getting out.

The gore and horror are worth every second. The relationship between Xie Lan and Hua Cheng is the chef’s kiss. The world-building is complex yet aesthetically pleasing. The animation with its blood and gore is a treat to watch in the action scenes. The animated gardens and castles make you feel at peace with their serene aesthetic and calming vibes. Xie Lan’s character is a treat to watch. His grief and trauma tear you apart. Hua Cheng’s kindness and trust tear your heart apart. The story conveys the feelings of trauma, grief, and longing. The kissing scenes are satisfying when they finally happen because of the long-held tension between Xie Lan and Hua Cheng. Their chemistry is chef’s kiss and makes the audience crave a relationship like them. You fall in love with Xie Lan and Hua Cheng’s personality at first sight. You want to hug them, and tell them they are made for each other. It can be a bit frustrating when they don’t share their feelings, but it is all the more satisfying when they do.

The drama is relatable and radiates warmth. The story follows eccentric characters that struggle and survive in the most challenging times. If you want an excellent yaoi fantasy that makes it worth every second, this series is for you.